In a development that has changed the entire Lunchsketball landscape, Adam, aka “Whirling Dervish”, has started to figure out how to put the ball into the basket. In the old days, Adam did a lot of things on the basketball court – rebound, play defense, taking vicious dives to the pavement, etc. – but there was one thing which he did not do, and that was make baskets.

That has changed now. It all began when Adam started taking shots. In the early stages of his career, he rarely even tried throwing the basketball in the general direction of the hoop. If he got the ball, he would usually pass it. He approached basketball much like a football game, inasmuch as that he played only the defensive side of the ball, and occasionally tackled Matt. Gradually he started taking shots once it a while. The shots started going in, and then it started happening more and more.

Over time, Adam has progressed into a reliable scorer. There remains room to improve; Adam himself admits that he has trouble scoring when standing still directly under the rim. In general, however, he has a knack for getting the basketball through the net, and now defenses as well as team makers will need to adjust.

An expiry notice for the domain name www.tobysnewtrick.com was received by webmaster Jorge this week. Renewal payment was due on 12/12/2012, and the site will become subject to deactivation by 12/26/2012.

Longtime fans know that the Lunchsketball blog is a spin-off from parent website Toby’s New Trick. The website enjoyed a meteoric rise to prominence shortly after it’s launch in late 2010. It was perhaps best known for the “Lunch-sketball” page, although it featured excellent and humorous writing and animation on a wide variety of other topics.

Player of the Week:

Congratulations to Samer’s cousin-in-law Nathan! Nathan can’t seem to lose games anymore. Lunchsketball record-keeping does not go back far enough to trace the last defeat of a Nathan team. 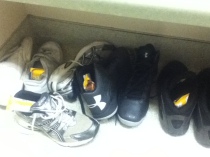 EL CAJON, CA – For the second week in a row, it is shoes in the news topping the headlines. Lunchsketball players felt the joy of the season on Thursday morning when they awoke to find that Saint Nick had visited and left their basketball shoes stuffed with delightful surprises overnight. Each player received a nutritious protein bar, courtesy of the saint known best in the culture as the original Santa Claus, although more recently gaining recognition for his legendary slapping of a heretic.