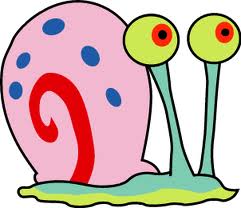 Last week, as you may recall, it was decided that the animal which best represents Gary is the snail. Gary took exception to this, and reacted by finding ways to showcase his speed throughout Monday’s game. For example, there was a moment when he picked up a the ball on defense after a foul, and began running toward his basket.  Despite 7 other players yelling “Dead ball!” and “Stop!”, he continued, in a show of his blazing speed, all the way across the court and scored a layup that didn’t count, since play had been stopped. “Would a snail do that?” he then asked, rhetorically.

Gary admits that he does appreciate the Gary the Snail character from SpongeBob Squarepants, and has, interestingly enough, been known from time to time to say “meow”, so it isn’t exactly the snail comparison that he disagrees with, as the assertion that he is slow.

That is a fair point from Gary, and so let the record show that the animal he is most like is not a snail, but rather a mutant, nitro-burning, turbo snail.

Adam, aka Sid: Sloth. Adam has long born a resemblance to Sid the Sloth from Ice Age.

Gary: Snail. This was a difficult one, but there is a snail in SpongeBob Squarepants, and his name is Gary, and Gary the basketball player moves rather slowly and stays close to the ground.

Scooter: Honey Badger. You think Scooter cares? He really doesn’t give a darn. He has no regard for any other basketball player, whatsoever. Pretty much does what he wants.

Kerry: Hookworm. That’s an animal which happens to have “hook” in the name. Plus Kerry is pretty good at getting rebounds, like Dennis Rodman, aka, “The Worm”.

That last one was a reach, but there must be more. Darin, Jimbo and Erik all have yet to be compared to animals. Please make additions to this list in the comments.

Player of the Week:

Congratulations Alex! Alex is a friend of Jourge’s, and he has played maybe twice. Alex wins Player of the Week for his heroics on Friday. After carrying his team to a half-time lead, Alex took an excruciatingly painful nut-shot. He never left the court, but courageously limped back and forth between the 3-point lines for the rest of the game, in too much pain to look up, much less catch a pass. His team, affected by this show of perseverance, pulled together and finished with a win. As Ray Zalinsky once said, send over a bottle of bubbly in a bucket of ice…

Game of the Week:

The rain cleared long enough to allow a game on Tuesday, and what a game it was. Gary, Kerry, George and Richie took the court versus Erik, Jim and Jourge. It was an interesting game: Gary’s team had an extra man, and more experience playing as a team, but Erik, Jim and Jourge had the upper-hand in terms of size and speed, and could create match-up problems and win any jump-ball.

As expected, the four team was able to get a lot of open shots by passing, and Jourge was able to score at will by just driving around/jumping over all four of his opponents. Kerry stepped up big on the boards, and Richie shot respectably well. Gary mostly complained about the Under Armour basketball, which is not his favorite basketball. The game went down to the wire, and was won on basically a coin-toss of a fade-away shot from George.

Esteemed apologist Tim has appeared in a game in back-to-back weeks… Darin (knee), aka Darryl, has been placed on the disabled list indefinitely; he is getting kind of old… For those of you keeping track, John needs to play in nine (9) more games before January 1, 2014 in order to reach his 2013 quota…

Shoes in the News:

Erik forgot to bring his gear on Tuesday, and so, as is the custom, he scrounged up an ensemble of unclaimed gym clothes from the warehouse and bathroom areas. In selecting shoes, his strategy was to find the first pair that would fit and did not have holes in the sole. This turned out to be Jorge’s recently purchased, Caltrans-orange Nikes. He liked them so much that he borrowed them again on Wednesday, and turned in one of the better performances of his career.

Player of the Week

George is the player of the week. It’s about time, right? When he couldn’t find his shoes on Tuesday, he didn’t give up; he found a dilapidated pair of running shoes, strapped those on, and orchestrated a fine victory, without a complaint. George’s teams went 2-0 this week, and he submitted brilliant performances in both. On top of that, he went home and blogged about all of it. Congratulations, George!

It was an action-packed week in El Cajon. Monday saw Gary join forces with the acclaimed “Dream Team” of Darin, George and Kerry. They dashed out of the gate to a huge half-time lead over Jacob, Phil, Jim and Richie, only to find themselves about an hour later trailing 57-49 in a game to 60. At that point, Gary went to the well, put the team on his back, and carried them home to victory, beginning the comeback with a 3 pointer from the top of the key, and finishing with a long, off-balance, hand-in-the-face, into the sun, game-winning 2 pointer.

By Friday, East County San Diego temperatures had soared to the 80’s. The game was moved up to an 11am start to catch the last of the cool morning air. That’s a precaution that is often taken in the summertime, because Gary’s wife will send him to the dog-house if she finds out that he played basketball in temperatures above 90F. It is one of her rules. The teams on Friday were basically a rematch of Monday, except Jacob’s team traded Jim for Adam, aka “Whirling Dervish”.  Jacob was the hero in this one, firing an impressive barrage of 3’s, and leading his team to victory.

Beards in the News:

With the approach of Pentecost, Darin has resumed full beard power, after abstaining from facial hair for Lent. He is once again the prolific scorer and intense defender that was known before Ash Wednesday. Adam underwent a severe trimming recently, but took the appropriate measures to respect the beard, leaving sufficient face hair to keep his game up to par.

Link of the Week:

Please enjoy “A Night at the Flopera”. Turns out that flops look pretty cool in slow-motion to the right soundtrack.